Unlocking the Potential of your DNA 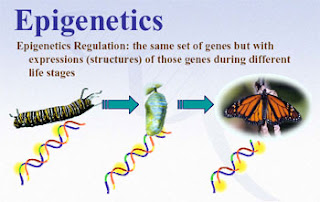 A few months ago I read an interesting article in the publication my med school alma mater sends outlining important advances in the field of epigenetics.  Most of us have heard about the Human Genome Project and perhaps understand the basic idea of how DNA works.  You know that DNA makes us who we are.  But have you ever wondered how all the cells in your body carry the same DNA as the first, but vary widely depending on location and function?  For instance, the cells in your stomach are pumping out acid strong enough to eat through nails, yet the cells in your eyeball have enough intelligence not to do that.  How is it that when a liver cell divides and makes a copy of your entire genome, it remembers that it is still a liver, not a lung?  Well the science that explains these observations is called epigenetics, literally “above the genes”.
This is the science of turning genes on and off on your DNA.  A good analogy I've read is that DNA is what is written in ink, your epigenome is what is written in pencil.  It determines the appearance, fate and function of the various cells, and ultimately the organism as a whole.  The bad news and the good news about this epigenome is that it is very responsive to the conditions in and around your body.
It has been determined that the environmental conditions that one is subjected to are just as important, if not more important, than what is coded on the DNA itself.  Thus identical twins, literally clones of one another, can be so different in terms of the way that their genes are actually working, that one dies young of cancer, while the other enjoys a long, healthy life.  The difference between the two being factors such as diet, drug and toxin exposure, smoking, stress, physical activity, and any number of other human experiences.  Even more fascinating, these experiences and their effect on how the DNA is expressed can be passed on from one generation to the next.
Furthermore, experiments have shown that you can reverse a harmful pattern of DNA expression in an animal’s offspring, by changing something as simple as the foods being consumed.  Check out this video from Nova describing how this was done with mice being fed methyl rich foods (Hint: navy beans, milk, & whole wheat bread are packed with methyl rich nutrients...)

There was even an article in Time magazine in January 2010 describing an observational study in Sweden, where it was found that boys who experienced just one abundant harvest and enjoyed just one gluttonous winter, produced sons and grandsons whose lives were curtailed.  When they controlled for certain socioeconomic factors, they found that this difference in lifespan was a whopping 32 years!  Similar lifespan reductions were observed in females.  As a physician who is all too aware of the overwhelmingly unhealthy diet of the men, women and children in our communities, this literally brought tears to my eyes.  If a single winter of a child overeating sentenced their grandchildren to an early death, where does that leave us?
On the bright side, it has been shown that mental function in animals can be improved from one generation to the next with exposure to memory problems, toys, exercise, & extra attention.  So learn, live, love, laugh...and move!

﻿ ﻿
As I've spent the past month fasting for Ramadan, I have reflected on the
possibility that all of the prayers, fasting, restriction and other ways of devotion shared by many faiths around the world are a divine way of guiding us towards a heavenly state of body and mind while we live.  After all, if we were made in the image and likeness of God, maybe we share some of His DNA.  Following the commandments of the Creator might be doing something to our DNA that makes us more like Him.
﻿﻿
﻿﻿ Perhaps that's a leap, but I believe there are reasons behind many religious practices that are based in science and lead to the spiritual outcome many of us are seeking.  In any case, it's good to know we can control our genetic destiny to a degree.  It's hard to avoid every environmental insult, but knowing the choices we make have a lasting effect has left me more motivated to acquire & maintain healthier habits.  I only wish I'd known this before I had my children.  I might have been even more careful about the epigenes I was passing down!

Dr. Safiyya Shabazz
Philadelphia, PA, United States
Safiyya Shabazz, M.D. is the owner and Medical Director of Fountain Medical Associates, PC. She received her Bachelor of Science in Engineering and Medical Doctorate from the University of Pennsylvania, where she completed residency training and formerly served on the clinical faculty. Dr. Shabazz is a diplomate of the American Board of Family Medicine and an active member of the Philadelphia community.